Every PROCE55 app consists of several screens. By default there are minimum of two screens: ‘initial’ and ‘s1’. The initial screen is where the app starts processing. It contains a single button marked as ‘[x] Auto-click’, which means it is ‘clicked’ automatically by the engine, taking the screen navigation to the button’s target screen (‘s1’ by default). It means that the first screen users would see is the ‘s1’ (= screen 1).

The initial screen is hidden and it allows you to carry out any background preparation when entering the app before the first visible screen shows up. For example, you can call a service and load a screen table with data or read variables or data saved persistently in a device’s storage (e.g. using TableSave/TableLoad actions or a local service call using SAVE_PARAMS/LOAD_PARAMS). You can add more screens to your app (they would be named ‘s2’, ‘s3’, …) and navigate them using button element’s target screen property.

To exit your app you can put a system action called ‘Exit’ to your button element’s action sequence. It is also possible to set up an advanced navigation path based on SYS_RESULT system variable value. This will be covered in a separate topic. 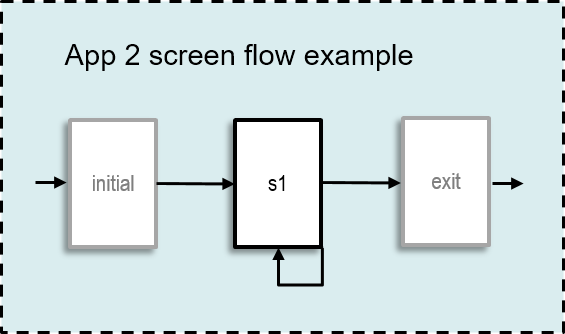